Born in New York City and raised in Boston, Maria Coundjeris «returned», literally as well as metaphorically, to the land of her ancestors.
In this series of art works she redefines the myth of the "tree-woman" by reviewing in depth the essence of human nature, its dimensions and affinities, with an obvious love for the 'minimum' which can yet become the core of the 'whole'; the leaf, the branch, brings to mind the tree, the wood, endless motion, renaissance- rebirth.

Inventive, with a fresh look and original style, Coundjeris manages to escape the reef of superficial and sometimes ornamental presentation of visual reality even at her debut in the art scene.
Her well-considered choice of media (pen and Indian ink), offer her a unique vision of the dynamics (gave her control) of the so-called "non colours", black and white.
In a laconic manner she gets a highly meaningful message across and imposes it to the viewer.

Having as a starting point a mere intellectual management of the line, she chooses to add consciously colour, granting on one hand an alternate dimension to her figures and on the other bring colour to prominence as an autonomous entity.
With a subtle perception of things, she persists in the essential, driven by clear design and a carefully weighed composition, which misses nothing from its truth, its essence and character, ascribing thus to the reality of human existence a more primeval and decisive meaning.
Some of her figures leave the taste of anguish, some that of inner quest and others of unconstrained erotic or redemptive transcendence of the body's limitations.
Ethereal and full of liveliness bodies interlace with trunks, sometimes rendered with plain lines, sometimes with adhesions and creepers, while they use 'body language' to express all to which the soul gives credits or presses charges; all those things or feelings that make hands embrace, tighten around a body, hide or expose parts of it, stretch to reach or keep away from the other.

Daughters of Uranus, Amadryádes (Hamadryádes), whose name derives from the combination of the words 'tree' and 'woman', always captivated and inspired poets, writers and artists who praised their grace by all means and manners.
Coundjeris uses this theme as the master- trunk in order to spread her Amadryádes like branches in several variations: sometimes lonely and thoughtful sometimes in company.

While the subconscious modifies surrealistically their full of emotion figures, her nymphs, pregnant with ideas and notions, trigger the viewer's memories and thoughts while inviting us to interact with them. Ridding them of secondary or verbalistic elements, she avoids pretentiousness and rants, directing us to the core of things, far and beyond the 'surface'.

As mythical, archetypal and cosmic symbols, Chrysopelea, Daphne and the other tree -women carry a timeless and metaphysic, universal message, reminding us of our "nature" (female nature, mother nature etc) while resetting our relationship with it.

According to various traditions, only the 'very lucky' or the 'touched' ones, the rather fey, could encounter these creatures or even spy them dancing before the dawn.
Viewers and fans of this collection may safely enjoy them here, approaching thus our 'own' nature, from which we choose so absurdly nowadays to alienate ourselves from. 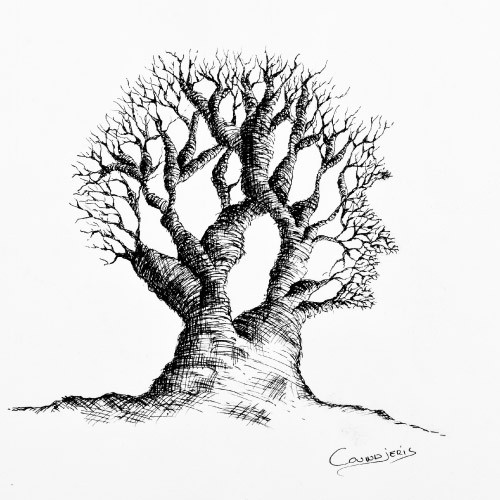 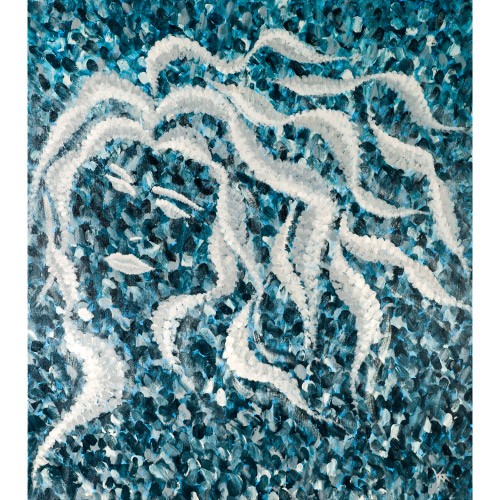